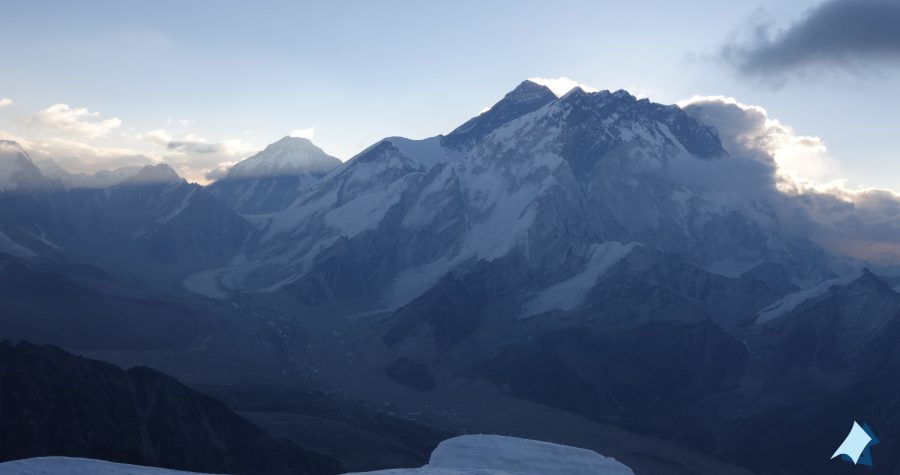 It’s dark outside; no moon, no stars. A light flurry of snow is surrounding the tents. The weather is demanding caution. I’m up way before the alarm. My stomach is complaining – last night’s food or the usual anxiety? I crawl back into the tent and the sleeping bag. Another two hours till the agreed wake up time. Uneasy sleep follows. Time stretches bizarrely. Another 70 minutes. A long time passes. 62 minutes. I have to keep my hands off that watch. It’s a major task to get my hands in and out of the sleeping bag anyway. I’m trying to lie still. 15 minutes before the alarm, I give up. I retrieve all the layers and kit from the depths of the sleeping bag. The inner boots, several pairs of socks, several gloves, the remaining water…it’s surprising how many random things you can fit in there. As I’m getting the boots on, I can hear the hissing of the gas burner from the other tent. Not long till Lhakpa comes over with coffee and cereals bathing in incredibly sweet milk powder – don’t mind the taste, at 1am and 4800m of altitude, it’s all about shoving it in and keeping it down.

We’re off; earlier than planned. The weather is unpleasant but we get going. The first 250m of vertical ascent flow well. The recce from the previous day is paying off – if only for raising the confidence. We cross a steepening scree field and then scramble along a shelf that leads over the rock barrier up to the plateau of the high camp. Some parties start their summit bid from here. This shaves about 45-60 minutes from the ascent time but the camp is also more exposed to the weather. A few tents are scattered around. There is light in one of them but no movement yet. The higher sections of the route lie in darkness. 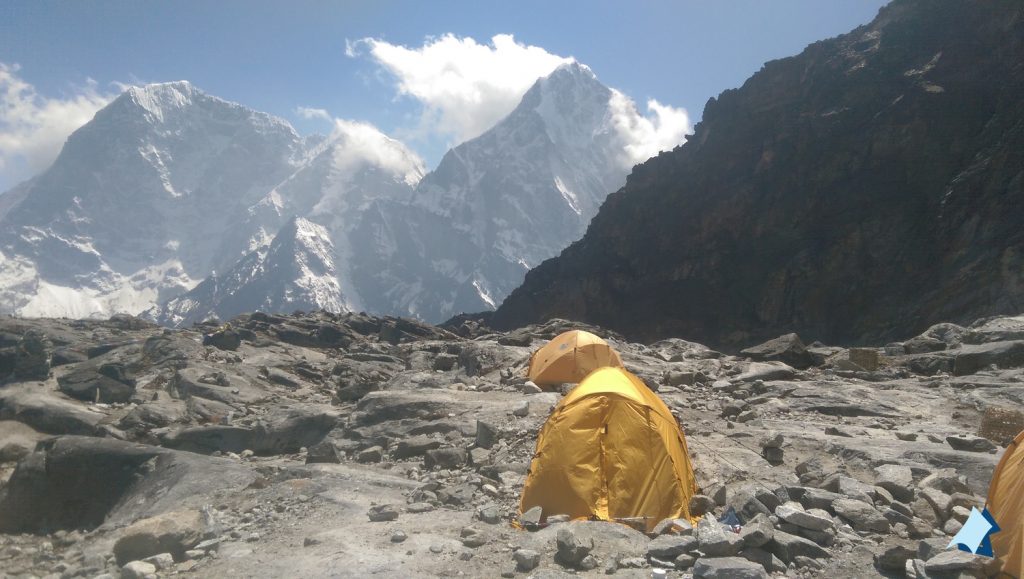 From high camp there is another rock section to maneuver. The first bit is relatively easy terrain but then claiming more and more attention, especially in the dark. My stomach is acting up again – I can’t get rid of the lingering milk powder taste. Darkness covers everything beyond the immediate beam of the head torch. There is something ominous about it but then it also takes the sting out of any exposed sections. We scramble along up to crampon point at about 5500m. Time to rest for a few moments and look around. While I’ve mostly been watching my step, the crampon point gives the chance to break that narrow focus for a few minutes. Faint lights are visible to the North-East – the Khumbu icefall. It’s early in the season; Sherpas are preparing the route through this treacherous section of the Khumbu glacier. The village of Lobuche still lies in the dark. The clouds and snow flurries shroud most parts and yet – the panorama feels somehow momentous. We’re far removed from the places and still, they seem within easy reach.

There is not much time to philosophize or process the impressions – time to get those crampons on. I’ve been covering the first section in normal alpine boots with the intention to switch to the much warmer yet bulkier plastic boots. But my feet feel warm and comfy. I decide to keep those on and leave the plastic boots behind. Lhakpa is wearing leather boots as well. After less than 10 minutes, we resume our way up. The rock is now covered in snow and quickly leads to steeper neve sections. The crampons bite into the hard snow with a crunching sound. Conditions couldn’t be better. The firn is homogenously hard. It takes some effort to get the crampons in, but there is no risk of breaking through the hard layer and sinking in. This saves a lot of energy. As it’s getting steeper, fixed ropes become visible. But many are frozen into the snow, rendering them useless. It’s flat enough to leave them be. When a section is covered with a new, good rope, we clip in to preserve energy. There is something deeply satisfying about eating up rope with a jumar.

Not long until I start feeling the altitude – I need to stop more frequently for some hard breathing. And then there is the milk powder taste again. Lhakpa seems to move without difficulty (and unaffected by the milkpowder) – his adaptation to altitude is impressive. Every now and then, as I’m trying to accumulate enough oxygen for a couple of more steps, I glance towards the summit. It now lies in a straight line ahead with a steep drop to the right all the way down to the Khumbu glacier. The summit itself is just a black shadow against a dark sky – an imposing shape, impossibly tall. How steep is that?! Worst of all, it does not seem to get any closer between breathing stops. Initially I set targets in vertical distance – 25m between every short breathing break. Then every 10m and finally every few steps. Progress feels incredibly slow. I look down, waiting to be overtaken. But it’s dark behind us. We’re alone on the route.
Time seems to be in a hurry, eager to catch up what it lost earlier that night while we are stuck in a loop – three steps, breathing break, another three steps. It doesn’t feel like we’re covering much ground and yet the altimeter is indicating progress. It takes some time to get used to this slow rhythm but at least it’s a stable rhythm. The darkness is lifting. We pass a relatively flat section just to hit another steep passage. But again: perfect conditions. We haven’t spoken more than a few words since crampon point. The crunching sound of the crampons is our soundtrack.

It comes as a surprise as the ground levels out to a small plateau. The fore-summit and the summit ridge. The blinds are lifted to a vast panorama of imposing mountains. Everest, Nuptse and Changtse form a seemingly impenetrable compound. Lhtose is hiding in the clouds. Cholatse and Tawoche are proudly displaying their North-Eastern flanks. The valley still lies in the shadows while higher up light is flooding through every gap. It feels warm getting rid of the darkness but I realize how cold it is once I take off a glove to readjust the camera. After only a few seconds, the fingers turn stiff. Even the relatively weak wind has its effect.

Our ascent ends here. We did not come prepared to cross the vast gap in the ice to gain the final bit of the summit ridge. We turn around content that we made it before the sun could rise above Everest. An unmissable photo op. The way down is uneventful but tedious. While it was easy to fight the way up, it is now much harder to keep equally alert. An incredible urge for a nap takes hold that becomes harder and harder to fight. Especially as for most of the route the base camp is visible but seems as unattainable as the summit did in the morning. Thoughts circle around a paraglider – we’d be down in minutes. As we eventually reach the high camp, we know it’s done. Time for breakfast in the sun.